Trial Sponsors and Their Contract Labs: Better Collaboration via OpenClinica

At Geneuity Clinical Research Services, we do lab tests for trial sponsors. As readers of this blog know, we use OpenClinica internally as an LIS (laboratory information system), but as more and more drug companies and CRO’s adopt OpenClinica we foresee the day when we will be using their installations as our LIS, not ours.  A common platform will eliminate lots of duplicated effort and will allow for real-time transparency and better collaboration.  But it will also require sponsors to design their CRF’s with their contracting laboratories in mind.  In this article, we describe how this could be done.
First, consider specimen collection and tracking.  Normally, trial sponsors don’t consider doing this within the context of OpenClinica.  But they should.  Let’s say a specimen accidentally thaws in transit between the collection site and the contract lab.  Shouldn’t that fact be summarily recorded in the same context as the resulting lab test whose value may ultimately be reported to the FDA?  I should say so.

So, can OpenClinica be configured to do this? Yes and easily. A separate CRF dedicated to specimen collection could be designed and assigned to each event.  Alternatively, a specimen section could be added to already existing CRF’s.  Either way, fields for such things like accession number and specimen type could then be included.  These would be filled in by site personnel responsible for specimen collection.  Additional fields like ‘shipping deviations’ and ‘laboratory receipt date’ could also be included and would be filled in by lab personnel upon specimen delivery to the testing lab.  When it comes time for data analysis, the sponsor can use OpenClinica’s data export capabilities to exclude or include those lab results with shipping deviations and to investigate the consequences.

Other important aspects of specimen collection include printing labels to barcode samples and generating an attendant paper manifest (know as a requisition) against which labs can check incoming shipments of specimens.  OpenClinica can’t do such things currently.  It would require a whole new software module, but lots of added value could be achieved if one were written.  For instance, one can envision that after accessioning a specimen, site personnel could print a corresponding requisition from the same application window.  Also, imagine the time savings if lab personnel could conveniently print barcode labels after receiving a specimen and recording its receipt date and shipping deviations (if any).  And because the paper requisitions would be generated within the context of OpenClinica, subsequent source data verification by lab personnel could be expedited using QR-encoded URL’s that drill-down into the patient-event matrix. For more on this, see here.

Specimen tracking is just part of the story when it comes to sponsors and their contract labs.  Getting lab data from the laboratory testing platform into OpenClinica is another.  Recently during OpenClinica’s March 22 Global Conference in Bethesda, Akaza Research and Geneuity did a live demonstration of how this can be achieved using a set of MirthConnect channels. A batch of raw lab data keyed only to accession numbers was sent from Geneuity’s corporate headquarters in Maryville, TN to a remote OpenClinica installation hosted at Akaza’s Waltham, MA facility where it was inserted into the database programmatically via an awaiting web service. The insertion was streamlined, secure and seamless.  When setting up a trial, sponsors should think about the lessons this demo provides and consider distributing already configured and validated MirthConnect channels to their contract labs.  In this way, sponsors can control how their data is treated and understand every detail of its electronic provenance. And because MirthConnect can be configured to store its history, the trial’s audit trail can be extended upstream to the data’s very source.
Finally, consider invoicing.  Contract labs have to be paid when they do a test.  Monthly invoicing reports could be generated from OpenClinica by configuring an appropriate ‘data set’ and having it execute at the end of each month using the application’s new built-in quartz scheduler.  In this way, billing would be a snap and everybody would be on the same page.

In summary, how can trial sponsors configure OpenClinica to collaborate better with their contract labs? Do the following, keeping the workflow shown in Figure 1 in mind:

1.    Include a specimen accessioning CRF for each event.  Educate your collection-site people and your lab people as to who is responsible for which fields.  Use OpenClinica’s internal messaging system to remind people of their roles when the study is actually underway.
2.    Exploit OpenClinica’s web services framework to enable batch uploads of laboratory data.
3.    Configure and validate MirthConnect channels to get the lab results from the source data files to your OpenClinica installation.
4.    Distribute these channels to your lab contractors and educate them on their use.
5.    Configure OpenClinica to automatically generate monthly data sets for billing purposes.

The bottom-line: OpenClinica is infinitely configurable and sponsors should start doing so with their lab contractors in mind.  The result will mean both better collaboration and lower costs. 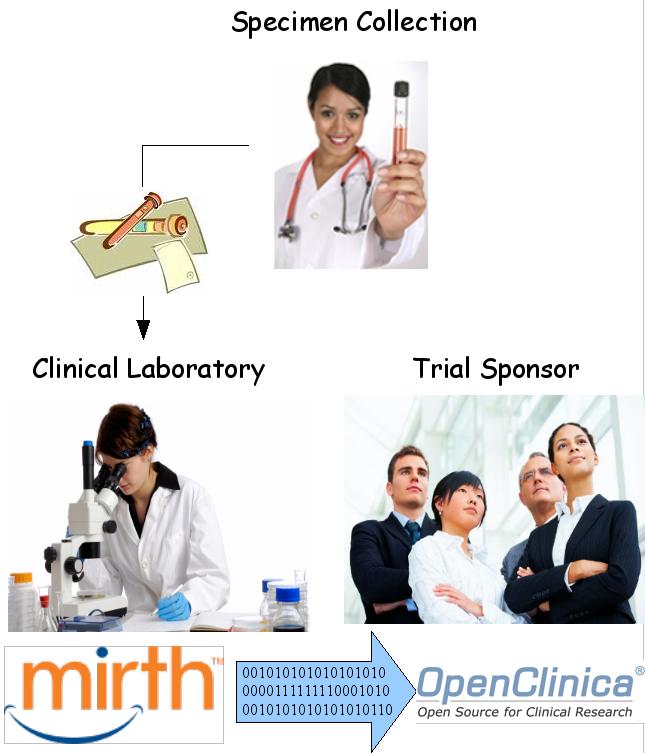 Figure 1: A specimen is collected from a subject on site. The on-site data manager logs into OpenClinica and accessions the sample and prints an accompanying hard-copy requisition. The sample is then shipped to the contracting laboratory where lab personnel log into OpenClinica and indicate they have received the sample. Specimens are then tested in batch and the results are then uploaded en masse into the sponsor’s installation of OpenClinica using a thoroughly vetted, validated and auditable MirthConnect channeling system.