Imagine a time when phones boasted no smarts. When technophiles worshipped noisy gadgets called modems. When The Human Genome Project sounded (to most ears) like the name of a progressive rock band.

Not to your ears, though. Suppose further that you’re an accomplished research professional of the era, medically trained, with degrees and vision to spare. Someday, you’re certain, paper records will give way to more efficient storage and retrieval. Zip disks, maybe? And this digital highway that’s all the rage, the “Web”, well, who knows? When adequate security measures are in place, maybe sites could email a digital CRF to the data manager.

It’s that foresight which, in the mid-1990s, has earned you membership to an international committee of your peers; a committee tasked with devising guidelines to “facilitate the mutual acceptance of clinical data” by regulatory authorities in Europe, Japan, and the United States. At least, that’s the operational goal, and a worthy one, too. You started in this business to push the best research out of silos and ivory towers and into the real world. But that mission is fraught with potential dangers. Not forty years prior, inadequate testing of an immunomodulatory drug led to the births of more than 10,000 children with limb malformations in Germany. Just three years ago, in a trial conducted by the NIH, five participants died of liver toxicity following experimental treatment for hepatitis B. Whatever standard you propose for maximizing the benefits of clinical research, it had better provide “public assurance that the rights, safety and well-being of trial subjects are protected.” After all, your committee is bound by the ethical good in its pursuit of the clinial good. You suggest calling the standard Good Clinical Practice.

Welcome to the International Council for Harmonisation of Technical Requirements for Pharmaceuticals for Human Use. And welcome to 1996.

But don’t get comfortable. This is the story of GCP–more precisely, the Guideline for Good Clinical Practice–and it is headed right back to the present, with its first amendment already in force in Europe. Why did the ICH amend its original guideline? Why twenty years later? There’s no single answer, but all the best answers revolve around one theme. Just as our phones have gone on to earn a postdoc in the last 22 years, the possibilities for research have matured, too. What’s more, their modern histories are linked, with technological breakthroughs inspiring the search for clinical ones, and clinical triumphs spurring ever more capable technology. Behind that push and pull, the need to ensure safety and quality remains constant. The story of the GCP’s amendment is a story of time-honored values upheld in new ways.

In a literal sense, E6(R1) hasn’t been replaced at all. The authors of E6(R2) choose an integrated addendum format when drafting the updated guidance. The original language, with all that it mandates, remains:

The addendum text clarifies the scope and meaning of preceding terms. Twenty years ago, the word “storage” brought to mind file cabinets. Early in this millenium, we might of have pictured hard drive volumes. Today, our heads are in the cloud. But in all of these contexts, storage that is secure and accessible is a must. It’s how we achieve it that differs.

But just how do we achieve it–meaning everything from security to safety to data quality–in 2018, when so many tasks once considered part of an “honest day’s work” are now specialties of automation, algorithms, and analytics?

Not even the full sixty pages of the document provide a specific, once-and-forever answer. (As a guideline, it shouldn’t.) What E6(R2) does propose is a 21st-century mantra for maximizing safety and quality. The mantra sounds like this:

“Oversee it all. Take action on what matters.”

There are some loaded terms in this phrase. “Oversee” might translate to “maintain real-time digital access,” particularly in the case of processes occurring daily all over the world, such as eConsent. And “take action” needs to cover both proactive and corrective measures. But with those common sense glosses in mind, we could do worse than take the directive above as the crux of E6(R2). What evidence do we have for this reading? Before we look at specific clauses in R2, we can gain a strong sense of how the amendment differs from the original by looking at the frequency of key terms. 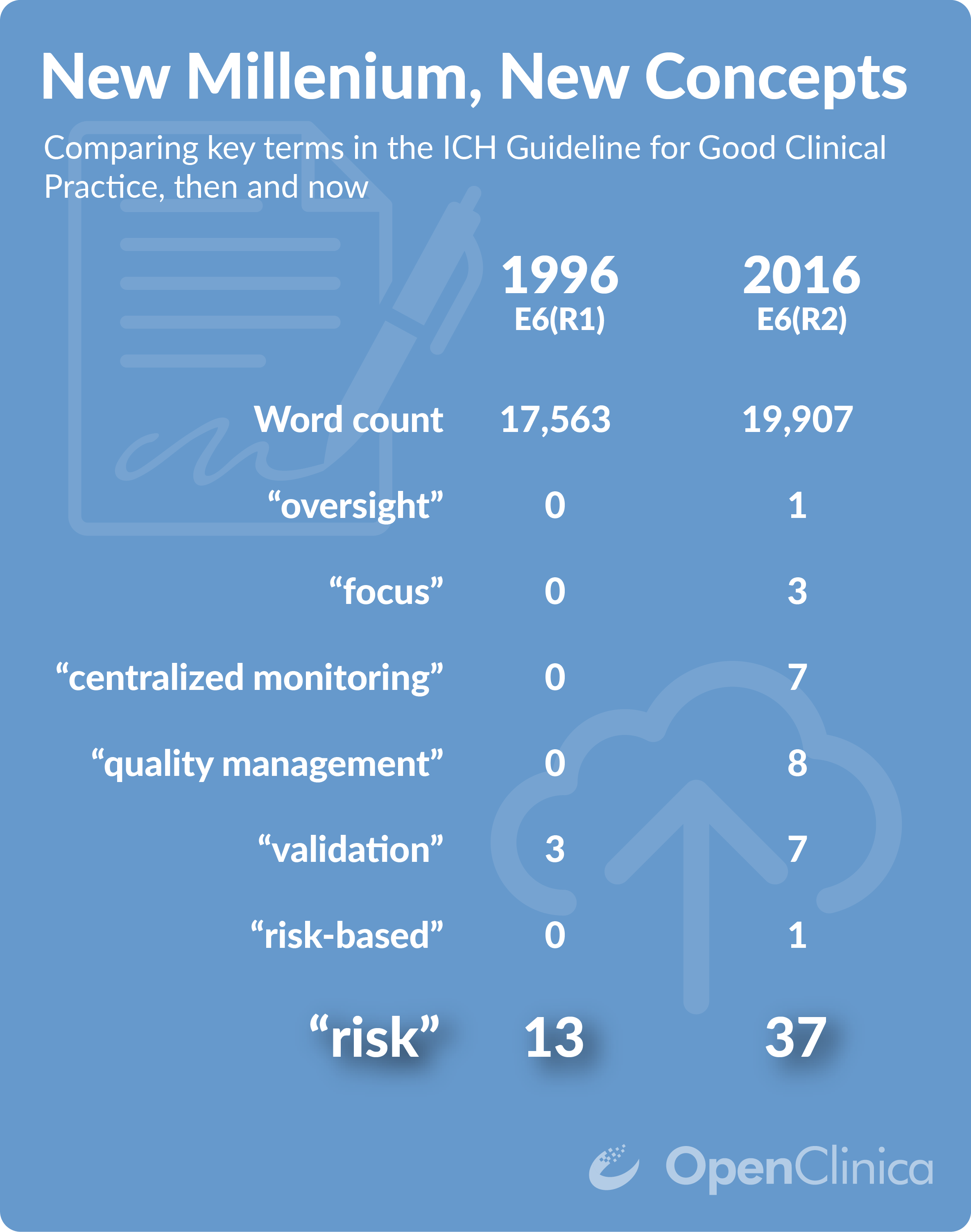 Clues that the GCP has grasped an important truth. The sheer volume of data now available to us raises probabilistic, “big data”-inspired thinking to a virtue.

Terms like “risk-based” simply weren’t part of the vernacular in 1996, so it’s no surprise that they should make their first appearance only now. But the concept of risk is as old as modern, statistically-informed research itself. So why does the word itself occur twice as frequently in R2 as opposed to R1?

The answer is that risk is omnipresent now, not primarily in the sense of an unintended consequence, but as a factor in decision-making. How did this come to be the case? Along almost any dimension we consider–target enrollment, sources of data, self-reports–research is doing, and producing, more than it ever has. In some cases, like the breadth of genomic factors analyzed, research is doing more than we thought possible back in 1996. On the other hand, the number of hours in a day has remained disconcertingly flat (anyone working on this?). Human cognitive capacities and attentional reserves likewise remain more or less the same. Our technological capacities have grown in orders of magnitude, and that’s all good. But until self-organizing, self-monitoring trials (powered by AI) are the norm, we humans will continue to serve as the chief executives of research.

While the amendment stops shy of saying it explicitly, R2 recognizes that distributing our time and attention equally among all processes works against safety and quality. That’s because some studies are now so complex, or collect so much data, that line-by-line “box checking” not only becomes impractical, it distracts us from those risks that only become apparent on a “big data”-like view of key metrics. In other words, it’s crucial that we see the risk forest for the data element trees. That’s the message behind much of the amendment text:

From section 2, “The Principles of GCP”:

Does this mean less rigor in oversight? Just the opposite. The GCP amendment will require more vigilance from all parties, from sponsors and sites to CROs and vendors. It means bringing alertness and analysis to bear in order to find the boxes, not just check them. This isn’t the ICH throwing up its hands now that the “scale, complexity, and cost of clinical trials have increased.” It’s the ICH demanding that we learn, and practice, new survival skills in a new world.

So drop the Nintendo controller. Time to pick up some neural implants.